The Torah by heart: Students lain professionally in local shuls 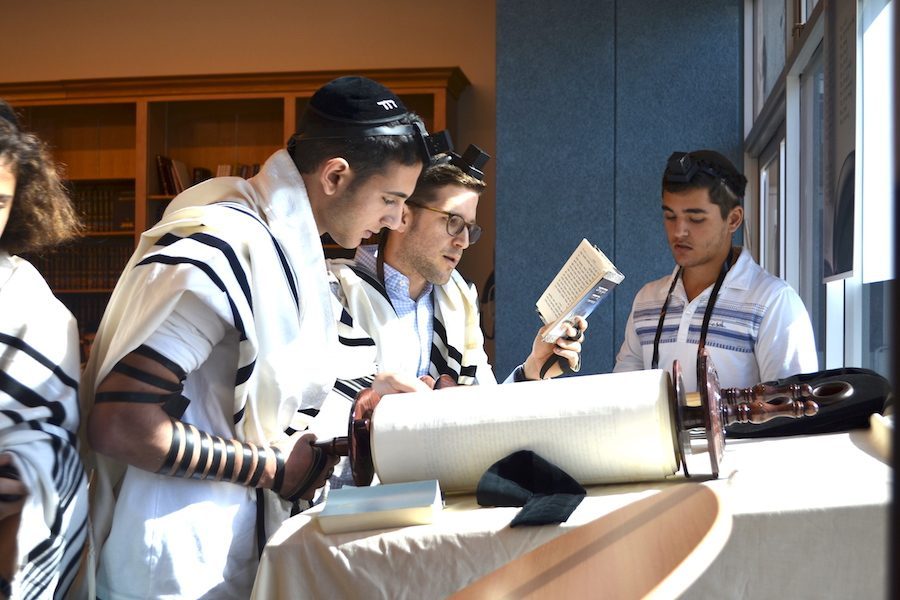 Senior Jeremy Ashagian chanted from the Torah scroll as Rabbi David Block followed along watching for errors. Many students know how to do this, and a few do it professionally on a regular basis at synagogues like B’nai David-Judea and Young Israel of North Beverly Hills.

For most people who learn how to chant from a Torah scroll, it’s a skill to use for their bar or bat mitzvah — something they either will never do it again or do only when that same parsha comes around each year.

However, for four of this year’s seniors, laining has become a part of everyday life — an extra-curricular without a team or awards, but with benefits both spiritual and financial.

“It’s rewarding,” said Adin. “A hard parsha is not really fun to do, but it’s cool. I know what to do. I can just get up there and lain.”

Jamie Berman lains mostly at Conservative synagogues, where women are counted as part of the minyan and thus read regularly from the Torah. Sometimes she is paid and sometimes she is not.

“When I learned for my bat mitzvah it was just stressful, but now I enjoy it,” Jamie said. “Torah trope is so cool. It helps get the Torah’s words across in meaningful ways, and it’s really cool to be studying Tanakh in class and know what the trope means.”

“It’s a lot of work every single week — at least an hour every night after homework or basketball practice and on Friday nights it’s at least three hours finishing up learning and reviewing the entire parsha.

She has lained a whole parsha for pay two or three times at Mishkon Tephilo, a Conservative shul on Venice beach. More often though, Jamie will read a single aliyah, or section of the parsha, about every two months — depending on her workload — without compensation at Temple Beth Am.

Ami Nelson lains one aliyah per week at the teen Shabbat morning minyan at B’nai David-Judea, earning for 50 cents per pasuk. He usually makes $10.

He also lains at school.

“It’s a good skill to have,” Eytan said. “I can lain for Hashkama minyan, or any minyan at school, pretty much every week because I’ve done it so many times and it doesn’t take me a long time to learn it.”

The art of laining involves singing the text of the Torah as written down in trope, which is the system of ancient symbols called ta’amim placed above the Hebrew letters to spell out a tune. No one is certain, but the common understanding is that trope was probably invented during the Second Temple period more than 2,000 years ago.

Since neither the ta’amim nor even vowels appear in the Torah scroll itself, lainers must memorize the words and the tune in order to chant them during services.

The length of a parsha, its word difficulty, patterns in the trope, how many times you’ve read the parsha before and how recently — and whether it’s on a holiday — can all determine how long it takes to prepare a parsha, the lainers said. The same symbols use different tunes on different occasions, and readings from the Prophets (Haftorah) have different tunes from the Torah, though the symbols are the same.

Every synagogue needs lainers every week and few can do it — making this an extremely useful and even lucrative source of income. More students don’t participate because it’s a time commitment and you usually have to wake up earlier than you would normally, especially on Shabbat.

“When I learned for my bat mitzvah it was just stressful, but now I enjoy it.

Eytan Kent spends a lot of his free time — sometimes the whole week — preparing the chant that week’s parsha — on average, one- fiftieth of the Five Books of Moses.

“It’s a lot of work every single week — at least an hour every night after homework or basketball practice,” Eytan said, “and on Friday nights it’s at least three hours finishing learning up and reviewing the entire parsha. I’ve been doing it for two years, and I hope to continue doing it this year and in the future.”

“It’s very stressful and I push it off to Friday night,” said Ami. “I’ll either go to bed really late Friday night or wake up early Shabbos [morning].”

Some parshiot are extremely long. Parshat Naso, for example has 176 pesukim, or verses. And the double parsha Matot-Massei, is 244 pesukim long.

Eytan declined to say how much money he’s paid each time or how much he’s made overall, but said he uses it for spending money.

Knowing all of Torah has its perks too. If you know Torah by heart, you are part of a select group of people who have this knowledge.

“If I’m in class and the teacher asks ‘Where else in the torah is whatever?’ I can literally just name examples from memory,” said Adin.

Rabbi David Block, assistant principal for Judaic Studies, described other benefits. A lainer himself in both the school minyan and at Young Israel of Century City’s teen minyan, Rabbi Block said laining can be seen in two ways: as either a chore or a beautiful, spiritual experience.

“It requires a real thoughtfulness and you have to be wanting to adopt that spirituality,” Rabbi Block said in an interview. “The grind of reading pesukim over and over, memorizing how you say a word and the trope, can be hard, taxing and sometimes frustrating. If you want to look at it that way, you could probably see it as a chore.

“If you have the mindset and presence and be like parts of this are hard — memorizing words, memorizing a tune — but it’s the opportunity to become really fluent with the words of the Torah.”

Moreover, he said, “the trope actually gives you insight into how the passuk [verse] should be understood.”

Perhaps that’s why those who lain hope to pass the skill onto their children. Ami and Eytan learned from their fathers, Adin learned from Jeff Magder at Temple Emanuel — someone his mom found — and Jamie learned from Hillel Tigay, who’s the cantor at Ikar congregation and the b’nai mitzvah tutor at Temple Beth Am.

All four plan on teaching their kids.

“I’m not going to pay someone to teach them if I can teach them myself,” said Adin. “If they have a shul that gives them the opportunity,” he added, he will “absolutely” encourage them to earn money the same way.

Jamie has already helped her family members with laining and has tutored people for their bar or bat mitzvah and plans to teach her own daughters and sons one day.

“I’ve already helped both of my younger siblings,” Jamie said. “I’ve taught my dad many many Torah portions, because he was taught to lain for his bar mitzvah from a recording and never learned trope.”

For now, it seems like laining is not so spiritual for the boys and more spiritual for Jamie. But as Rabbi Block put it, “There can be religious value to it. It’s in the hands of the one who’s doing it.”