CSPA cancelled due to coronavirus; JSPA will not meet 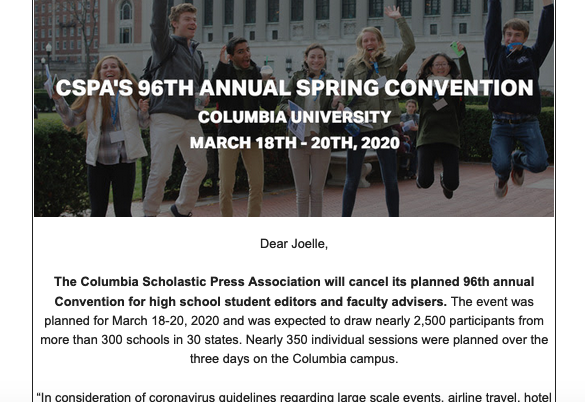 We learned just before Shabbat that CSPA has cancelled its conference this month due to the coronavirus outbreak.  The email from CSPA is below.

Since JSPA was to meet as part of CSPA, this means JSPA will not meet in New York.  Please read the email below for more information, and this website will be updated after Shabbat.

The Columbia Scholastic Press Association will cancel its planned 96th annual Convention for high school student editors and faculty advisers. The event was planned for March 18-20, 2020 and was expected to draw nearly 2,500 participants from more than 300 schools in 30 states. Nearly 350 individual sessions were planned over the three days on the Columbia campus.

“In consideration of coronavirus guidelines regarding large scale events, airline travel, hotel lodging and use of mass transit to get around New York City and reach the Columbia University campus where all convention sessions would be held, the decision was made to cancel the Convention for only the second time since it began in 1925,” said Edmund Sullivan, executive director of the CSPA.

“The continued health of our student and faculty attendees, as well as Columbia staff, is our paramount concern,” said Sullivan.

Further information on refunds to those already registered and paid will be available next week. Refunds will be made in full.

In other Convention related news:

Gold Keys will be conferred upon Justin Daigle, Brighton (CO) High School and Mitch Ziegler, Redondo Union High School, Redondo Beach, CA by video during the next two weeks.
In addition, the Joseph M. Murphy Award for Outstanding Service will be conferred upon Jennifer Dial Creech via video and the Charles R. O’Malley Award for Excellence in Teaching will be conferred upon Mary Kay Downes of Chantilly, VA, also by video.
Crown Awards to top publications from high schools and middle schools will be mailed to winning staffs beginning April 1. A video of the presentation will also be made within the next two weeks.
An effort is already underway to present a selected version of the Convention sessions via video. Further information will be sent to CSPA members and all Convention registrants when plans are complete. There will be no charge for those video sessions.

We thank you for your continued support of CSPA.