‘Unorthodox’: Is It the Single Story of Orthodox Judaism? 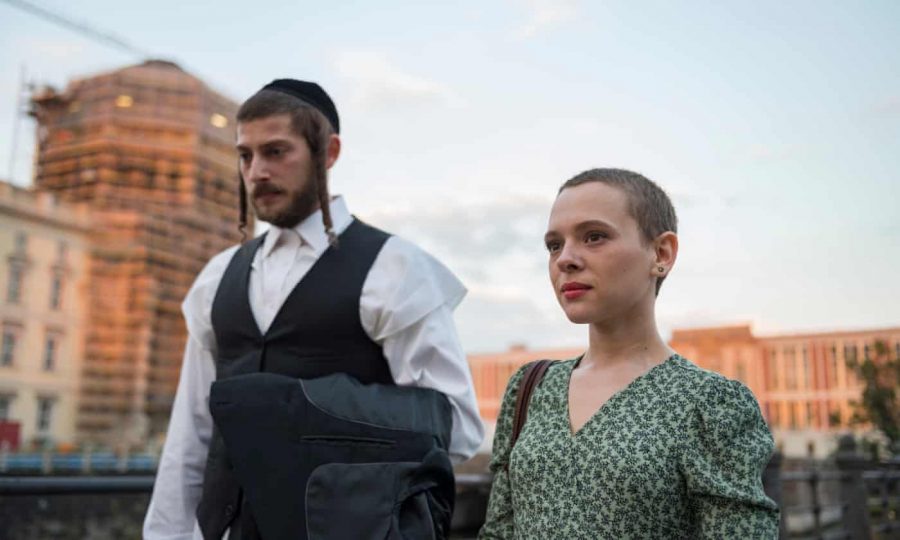 “Don’t forget, Esty. He speaks first.” These are the words uttered to Esty before meeting her husband for the first time. Shifting eye contact and awkward silence fill the room when Esty is seated across from Yanky, waiting for him to speak. The disconnect between the two of them seems beyond their space across the dining room table. After a good deal of uncomfortable small talk, Esty mentions her love for music, a hidden passion of hers, but the thought is quickly disregarded as the idea of a woman ever performing seems unimaginable to Yanky.

This initial encounter sets the stage for the agonizing arranged marriage process that unfolds in Unorthodox, a Netflix original mini-series that took the country by storm following its release in March of 2020. Based on the memoir written by Deborah Feldman, the story captures nineteen-year-old Esty Shapiro who flees the ultra-orthodox Jewish community of Williamsburg, Brooklyn in an attempt to start a new life in Berlin.

In recent years, anti-Semitism has increased extensively, which may be the effect of a lack of authentic and accurate representation throughout the media. As time has passed, a multitude of different stereotypes regarding Jews have been spread, and more often than not, the media we consume does nothing to break them apart. Whether it be Robbie Shapiro from Victorious or Rachel Berry from Glee, these token Jewish characters have no real depth behind their faith and provide no education about their beliefs. In the past, directors such as Woody Allen have grouped Jewish characters in these eccentric and talkative roles. However, their Jewish faith is a minimal component of their character arcs as they do not portray any Jewish traditions, but rather, fit the stereotypical attributes of a Jew. It is rare to find a Jewish television or movie character who can provide the audience with a deeper understanding of the religion, while also presenting an entertaining storyline that is not derived from typical Jewish tropes.

Unorthodox seemed to be one of the first shows to dive deeply into the Jewish religion as it pictures many practices of a typical ultra-orthodox family. It captures notable moments such as Esty’s conventional Satmar wedding and shows glimpses of their Passover Seder. Along with this, it draws attention to extreme religious traditions and the strictly imposed gender roles that come with it.

While the story needed to be told, Unorthodox can lead those with a sparse understanding of Judaism to generalize the experiences of Orthodox women and immediately conflate them with the portrayal depicted on the show. The series undoubtedly sheds light on an overlooked issue. However, it can portray a misleading picture of Orthodoxy as a whole.

While it is incredibly important to share such a powerful story, it is also essential to provide the necessary education surrounding other sects of Judaism. Despite being the same religion, Reform Jews and Orthodox Jews may hold vastly diverse beliefs and interpretations of Jewish text that translate into different customs and practices.

Chimamanda Ngozi Adichie, a Nigerian author, describes “The Danger of a Single Story” in her Ted Talk. She unravels the effects of assuming a particular narrative for an entire group of people, explaining, “The single story creates stereotypes, and the problem with stereotypes is not that they are untrue, but that they are incomplete.” Being one of the few realistic narratives, Unorthodox can be seen as the “single story” of Judaism. The show is so effective in its profound storytelling, that it has become a popular representation of the Jewish religion as a whole. It is easy for non-Jews to create this narrative about Judaism as they are not presented with other stories. Along with this, Jews outside of the Orthodox movement are at risk of defining Orthodoxy purely off of this single story — one that only draws attention to the negative aspects of Orthodox culture. When describing her own experiences, Adichie goes on to say, “All of these stories make me who I am but to insist on only these negative stories is to flatten my experience and to overlook the many other stories that formed me”. Believing that the traditional values presented in the show make up the entirety of the Jewish religion diminishes the experiences of other Jews. With more Jewish depictions in media, people will not have a “single story” of Judaism, but rather, a multitude of viewpoints to shape their perception of the religion.

Unorthodox took the first step in increasing Jewish representation throughout media, however, it is not enough. It is crucial to continue to expand the public perception of the  Jewish religion by breaking down stereotypes and supplementing more accurate and meaningful depictions into the various forms of media that are consumed.

This story won Second Place Prize in the 2022 Jewish Scholastic Journalism Awards in the category: “Opinion: Non-first-person opinion on any Jewish or Israel-related story. This category would encompass unsigned editorials.”

JSPA Judges’ Comments: A smart commentary on the dearth of in-depth portrayals of Jews in the media and a commentary on how this one good show can nevertheless need more context, and other stories to amplify the whole picture. This review does a good job identifying both the weaknesses of a film and what makes it valuable.