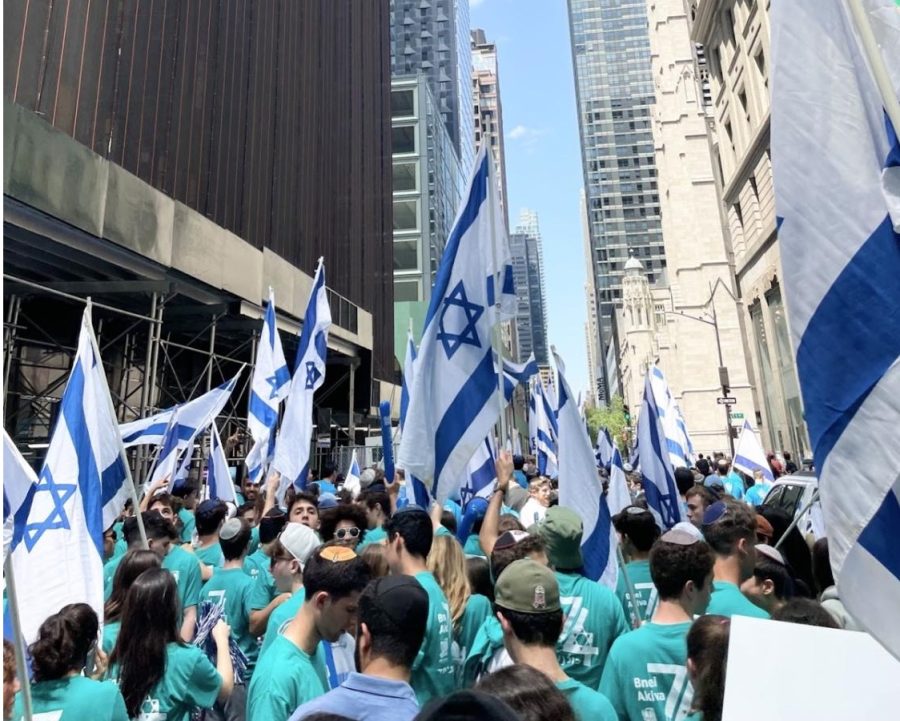 Thousands of participants gathered on New York’s 5th avenue on May 22 for the annual Israel Day Parade. They marched with pride as they supported the state of Israel’s 74th year of independence, its vibrant culture and diversity.

The origins of the Israel Day Parade go back to 1965 when thousands of American Zionist youth walked along Riverside Dr. in support of Israel. Since then, the parade has evolved into an annual event with marching bands, floats and thousands more people.

“I don’t go to so many B’nei Akiva events, but I do go to a B’nei Akiva camp and I go to some of the other events with my friends,” sophomore Rena Katz said. “B’nei Akiva helps me connect to the land of Israel because a lot of their speeches and events are Israel focused…We talked about Israel a lot in preparation for the parade and the history of Israel and things like that.”

Despite the 88 degree weather, the marching continued for an hour and half with lasting energy. The crowd included New York’s Governor, the Mayor of New York City, U.S. Senators, Congressional Representatives, Members of the State Senate and Assembly and members of City Council.

This year was especially important because of both the COVID-19 pandemic, which prevented the parade from occurring in previous years, as well as the major “Free Palestine” social media movement of 2021.

“This year we were with everyone and with COVID, we were not allowed to do this and so it felt so much more unified. Now that we could do this, everyone was there and it was really like [the Jews] came together for the first time in two years,” sophomore Ariella Litwack said.

Along the way, participants of the parade encountered some protesters in support of Palestine. Among these protestors were members of the Jewish group Neturei Karta. Their ideology revolves around the notion that Jews should not live in Israel until the coming of the Messiah. Therefore, within this small fragment of Judaism, there is a strong opposition to the state of Israel.

“When the [protestors] were booing us and holding up their signs we started singing really loudly. We sang all of our cheers. Throughout the parade we were of course singing loudly and raising our signs and everything, but when the protestors came, even more so we were such a community because they brought us together,” Litwack said.

This piece originally appeared in The Lion’s Tale on June 1, 2022.