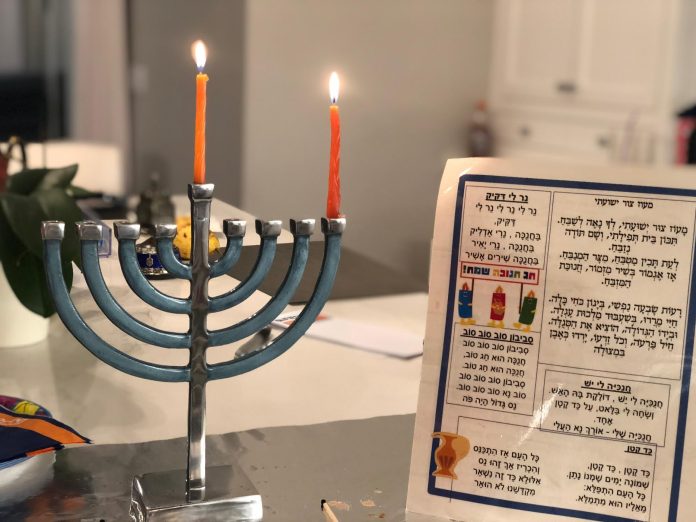 WINNER: This photo by Alexandra Orbuch of Milken High Schoolwas one of two first-place winners in the photojournalism category.

A total of 25 winners in first place, second place and honorable mention  were chosen from among 67 entries in nine categories from nine different schools, and the Grand Prize was chosen from among the category winners. Clara Sandler, co-editor-in-chief of the Boiling Point at Shalhevet High School, won the Grand Prize for her winning entry in the news category, titled “The Torah by heart: Students lain professionally in local shuls.”

The contest was judged by JSPA Board Secretary Kathleen Neumeyer, national award-winning journalism teacher who advised the Chronicle at Harvard-Westlake School in Los Angeles for 24 years; and Susan Freudenheim, Executive Director of Jewish World Watch and former Executive Editor of the Jewish Journal of Greater Los Angeles.

Judge’s comments: Four seniors are laining at other synagogues, sometimes for pay and sometimes as volunteers.  Lots of quotes and details in a well-written, well-organized feature story.

Judge’s comments: Interview with teacher who trained in Israel to be a yoetzet halacha—an adviser in Jewish law—about how she will use this in her teaching.  Good quotes from her, from the rabbi, and from some other experts. Several students were also quoted. Good job of writing a story based mostly on an interview of the subject, but also including substantiating quotes from others.

“Can it be for God when it’s for a grade?” – Lucy Fried, Boiling Point, Shalhevet

Judge’s comments: This is a nice example of good reporting in what might be called a round-up story, comparing what is happening at Shalhevet to other Orthodox schools across the country. The reporter has interviewed students at quite a few other schools, as well as some faculty members and administrators. The writing is straight-forward and professional.

Judge’s comments: February is 10th annual Jewish Disabilities Awareness month. Story outlines what is being done in second and third grade classess to educate about deafness, while fourth and fifth graders learn about autism and high school student have discussions on disability awareness, and hear from speakers with disabilities.  Material is well-organized and well-written with good sources.

“Yom Hashoah at KJ: Speaking for those who can’t” -Rebecca Massel, The Rampage: The Newspaper of the Ramaz Upper School

Judge’s comments: Account of a program held at the school to remember Holocaust survivors. Factual information attributed, quotes. Good example of news reporting and writing on a bread-and-butter kind of event that happens at every school.

Judge’s comments: A good news story about Night Seder, an innovation this school year held most Wednesdays right after school, even though it is not yet night. There are many quotes about why this was instituted, what kids think about it, how many have attended, who is leading the discussions. The only opinions are in quotation marks from people interviewed, not from the writer himself.

Judge’s comments: Lead is about a poll conducted by the newspaper about reactions in school community to use of force by Israeli military against Gaza protesters. Story correctly focuses on the local reaction, not on the event itself. It summarizes news reports and attributes the information for background.  Uses quotes from students and faculty expressing their opinions, both for and against the use of force. Well-reported, well-written story.

Judge’s comments: Well-written story including the factual details (how many students and adults attended from Shalhevet, how many overall at the conference, where and when it was held are in second and third grafs) the lede focusing on what the highlight was for Shalhevet students. Includes numerous quotes from students and faculty who attended and description of what Netanyahu said as well and reporting on all of the other activities the delegation took part in while in Washington, D.C.

Category 3 News or feature reporting on interreligious or intercultural events

Judge’s comments: This is a well-written interview with Rabbi Travis, who is teaching a new class on African-American history at the school. The headline is the name of the course.  It has good quotes from the rabbi, who says he was interested in teaching the class because he believes that students at an Orthodox day school tend to live in an all-white bubble, mostly never interacting with persons of other races or religions. It would have been a good idea to get a few other quotes—from students in the class, or from the department chair, or head of school about why the course was added.

Judge’s comments:  A well-written news feature about the mass shooting of Jews in at Pittsburgh temple and a vigil in Los Angeles that brought together mourners here. There is a scene-setting lede describing the vigil and the first few paragraphs provide facts, including an estimate of the crowd provided by the LAPD, which is usually an impartial source on crowd sizes. It explains briefly what happened in Pittsburgh, and has multiple quotes from attendees from the school, including faculty and students. It quotes from the speakers, including Los Angeles Mayor Eric Garcetti, and references remarks he had made to the Boiling Point in an interview earlier in the day.

Judge’s comments: This is a well-written story about two students who are taking part in a summer program where Jewish students teach Judaism in the public schools. The story has a good lead, and then a good nutgraf giving the background of the program. There are quotes from one of the students involved and his mother. There are no other human sources.

Judge’s comments:  Both of these entries are examples of excellent journalism on a near-professional level, using multiple sources, good attribution, quotations from students and faculty at the school. All of the stories do a good job of localizing a story to the school community, shooting how a tragedy on the other side of the country or miles away from the school could still have an impact on the students.

Localized coverage of aftermath of the mass shooting at Tree of Life Synagogue in Pittsburgh – Boiling Point, Shalhevet

Category 5: Opinion: Non-first-person opinion on any Jewish or Israel-related story. This category would encompass unsigned editorials.

“We were strangers in the land of Egypt” – Boiling Point Editorial Board, Shalhevet

Judge’s Comments: This is a top-notch editorial, exploring a topic of cultural dissonance on several levels at once. It criticizes the proprietor of a kosher restaurant in a neighborhood mostly inhabited by immigrants, where the restaurateur expresses anti-immigrant sentiments on social media. The student authors make sense of their own desire to visit the restaurant because of its locale, but are critical of the statements made by the owner, so say they will steer clear. The students clearly express their reasoning, the Jewish thought behind their conclusions and state what a positive outcome would be. Excellent work.

“Malady of hate: remembrance and rebuilding in the aftermath of the Pittsburgh Massacre” – Alexandra Orbuch, The Roar, Milken High School

Judge’s Comments: An adept combination of opinion, exposition with the cadence of spoken word. Good writing and insights.

“Two Viewpoints on the Use of the Beit Midrash” – Zach Mainzer and Medad Lytton, The Palette, Atlanta Jewish Academy

Judge’s comments: Two students write about the use of their prayer space for secular public activities, one saying this is disrespectful, the other disagrees. The topic engages both, and they make their arguments with strong points of view.

Judge’s comments:  Miller writes with conviction about his feelings of displacement and yearning for a way to fit into the structure of his school. Why such dissonance is common among high school students, Nate’s discomfort with prayer in a curriculum where that is part of the day is well-stated and brave, as he notes that others who share his feelings are afraid to speak up.

“Defiance and Convictions: What the Chanukah Story Can Tell Us about Women Learning Gemara” – Eliana Goldin, Palette, Atlanta Jewish Academy

Judge’s comments:  A smart exploration of the laws and prohibitions of Torah, bringing the arguments into the desire of the writer and young women today to participate in Torah study, exploring whether this is defiance or respect for study.

Judge’s comments:   A smart argument dissecting what it is to support Israel without any room for criticism, and the actress’s position on current Israeli politics.

“Would you like to carry the Torah?” – Josephine Schizer, The Rampage: The Newspaper of the Ramaz Upper School

Judge’s comments:  A second piece exploring girls engagement with Torah study and the place of women in religious life. This one explores girls’ reluctance to participate, as compares to boys, with compassion and insight.

Category 7 Photojournalism: Photograph attached to any Jewish or Israel-related story

Judge’s comments:  Photo captures an emotional embrace, wonderful use of closeup to show intimacy of the moment

Category 8: Layout, design or infographic attached to any Jewish or Israel-related story, one page or multiple pages

Judge’s comments:  Layout of multiple pages shows clear design sense, innovative use of graphics, and distinctive integration of photos and variety of fonts.

Category 9: Video reporting of any Jewish or Israel-related story

No winner this year.