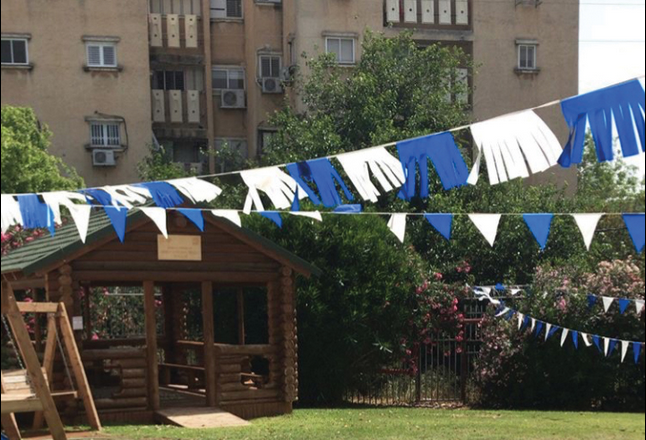 BEST OF THE BEST: A dormitory in Hod HaSharon, Israel, where students from Charles E. Smith Jewish Day School in Maryland spent their capstone trip last spring. Students from CESJDS’s The Lion’s Tale won the Grand Prize in Jewish Scholastic Journalism for their stories on student drinking on the trip, and how parents and administration reacted. The winning story was chosen from the first-place winners in each of the contest’s 10 categories.

Oren Minsk, Alex Landy, Matthew Rabinowitz and Josie Stein of The Lion’s Tale, based at at Charles E. Smith Jewish Day School in Rockville, Md., won for three stories spanning last summer, the first in May right after it happened and the final one in late August.

Together the stories won First Place in Category 5, Ongoing Reporting on any Jewish- or Israel-related news or feature story, in the seventh annual Jewish Scholastic Journalism Awards.

This year’s contest had 10 categories, ranging from news and feature writing to opinion, photography, video and page design.  The Grand Prize, which includes a recommendation for a summer internship at a professional Jewish news source, was chosen from among the 10 first-place winners in each category.

The awards are for 2019 work on Jewish- and Israel-related topics, published by current high school students in any publication. A list of winners appears below.

“This is excellent original reporting and follow-up on an issue of direct concern to students, giving multiple points of view, and including the various levels of discussion. It is a fine example of courageous scholastic journalism,” the judges wrote.

“Student journalists on the Lion’s Tale provided a factual account, providing various points of view, of a disciplinary matter that occurred while students from their school were taking part in a capstone trip to Israel. Several students, including seven graduating seniors, were accused of drinking alcohol and smoking marijuana, violations of the rules,” they continued. “The first story was an account of the incident and the discipline, including complaints by students about how the matter was handled, the second was coverage of a meeting of students, parents and administrators from both schools, and the third outlined changes being made as a result of the incident.

“By accurate and thorough reporting, the student journalists gave important information to readers and dispelled rumors, as well as modeling how a free press works.”

The winners were chosen from a total of 110 entries, up from 67 last year. There were 28 winners in all, published not only in school news media but in the Los Angeles Times High School Insider, New York Jewish Week and Fresh Ink for Teens.

JSPA had planned to announce the awards on March 21 at its annual conference and Shabbaton, this year was set to be held in New  York City in conjunction with the annual spring conference of the Columbia Scholastic Journalism Association.  However, CSPA was cancelled due to the coronavirus pandemic and JSPA did not meet.

Joelle Keene, JSPA’s executive director and founder, said the awards demonstrated the energy of today’s high school journalists and the potential for applying it at a professional level to Jewish subjects.

“The current moment has proven that news coverage is something people need,” Keene said.   “These stories show that high school students are stepping up to the challenge, providing real news to real people via all media platforms, and approaching Jewish subjects with professionalism and rigor.”

Here are the winners, along with judges’ comments on why they were chosen:

“Shalhevet announces it has suspended play against Valley Torah in basketball,”  by Alex Rubel, The Boiling Point, Shalhevet High School

Judges’ comments: Strong and courageous reporting on a controversy arising after scouting information provided to an opposing team may have contributed to the basketball team’s loss in the quarterfinals of the CIF championships. An administrator demanded that the coach be fired from the Jewish school where he worked, saying that it was a chillul Hashem for a Jewish team to provide information against another Jewish team. The story provides details on a complicated controversy with quotes from various points of view.

Judges’ comments: Dramatic, factual and well-written and reported account of a lockdown at school when an fugitive was believed to have hidden on campus.

Judges’ comments: Straightforward reporting on the creation of a new hechsher, which resulted in many more kosher restaurants being available to Washington DC area Jews.

Judges’ Comments: A well-written and compelling interview with an Israeli woman who spent two years as a postdoctoral fellow at Princeton, and will return to Tel Aviv University as a tenure-track professor, perhaps the first Chasidic woman to achieve such a position. She fears she and her family will not be accepted there.

Judges’ comments: Young adult author Laura Silverman tells interviewer that although she has faced some anti-semitism, she has also found support in her Jewish community which has helped her as a writer. Well-written interview, incorporating quotes with observations.

Judges’ comments: A well-researched, interesting feature with factual information about kosher snacks which taste a lot like Oreos, Cheetos and other non-kosher snacks, with a poll on which ones student like best.

Judges’ comments:  Interesting, well-written story about students planning to enlist in the Israeli Defense Forces upon graduation, with quotes expressing their excitement, trepidations, and motivations. Good use of quotes.

“Brexit Fears? Israel has a separate trade deal with the UK, just in case,” by Sam Rubanowitz, The Boiling Point, Shalhevet High School

Judges’ comments: A well-researched, informative story about Israel’s trade deal with the United Kingdom, including quotes from several primary sources, as well as interviews with a faculty member with expertise on the subject.

Judges’ comments: Well-written interview with an alum studying in Israel who had an opportunity to attend an event with Prime Minister Benjamin Netanyahu and prepared questions to ask if she got a chance to ask a question. Good use of quotes, good description of her process.

Category 4: News and Reporting on Interreligious or Intercultural Events

Judges’ comments: A very thorough narrative of a service trip to help migrants at the border. Good background,  good use of quotes, good reporting and compelling writing.

Judges’ comments: An anecdotal lead sets the scene at a West Side Comedy Club for a story that provides background and serious information about a HinJew comedy show featuring an Indian and a Jewish comedian. Strong reporting and writing.

Judges’ comments: A well-written account of a visit from the SquashBond Jewish and Israeli-Arab squash team, which tries to bring together different cultures through the sport of squash has strong reporting. Interviews with many sources give varying points of view. Good reporting

Ongoing means at least two stories on two different days, covering a story that is evolving with additional facts or occurrences.

Seniors and Parents Voice Concerns in Meeting with Administrators”

Judges comments: This is excellent original reporting and follow-up on an issue of direct concern to students, giving multiple points of view, and includes the various levels of discussion. It is a fine example of courageous scholastic journalism.

Category 6: Opinion – Non-first-person opinion on any Jewish or Israel-related story.

Judges’ comments: More than a movie review, this insightful piece examines a film about anti-Semitism in the context of its setting – Nazi Germany, and in terms of its appropriateness for today’s world.

Judges’ comments: A controversy over a coach’s reporting on unethical practices by a rival basketball team provokes concern about the coach as well as the newspaper staff’s reporting. This astute commentary attempts to give context to the situation, restore respect for the coach and clarify the role of the media all in a very brief piece. Excellent writing and insights.

“Fast Days in School, Not as Meaningful As They Can Be,” by Zach Mainzer, Palette, Atlanta Jewish Academy

Judges’ comments: Thoughtful and thorough examination of how students react to required observance.

Category 7 – First-person opinion or experience regarding Judaism or Israel

“Should we protest a ‘get refuser’ sitting shiva with his family?” Yes by Josh Glettner and No by Sam Rubanowitz, The Boiling Point, Shalhevet High School 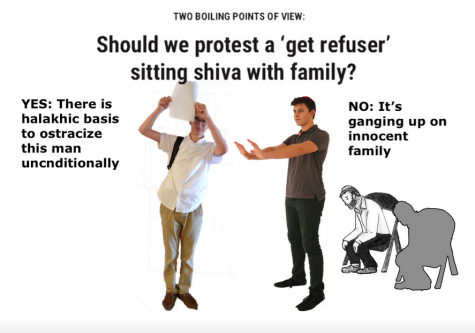 Judges’ comments: In a pro-con written debate, two writers lay out the argument as to whether a person whose actions are otherwise scorned should be the subject of a protest during a time of mourning. The two writers’ opinions differ, but the tone in each piece is thoughtful and helpful in laying out well-conceived arguments.

“The Fate of journalism is in our hands,” by Alexandra Orbuch and Emily Vanek, The Roar, Milken Community Schools

Judges’ comments: After attending the JSPA 2019 conference, Orbuch reflects with compelling passion on her own and her colleagues’ role as truth-seekers and journalists.

“My mother converted but I am not ‘half-Jewish,’” Abigail Yadegar, Fresh Ink for Teens, Milken Community School

Judges’ comments: Confronting prejudice among her peers against interfaith marriage in light of her own history with a Jewish mother who converted, the author examines what conversion means, describes her own family’s strengths, and relates that to the Jewish value of loving the stranger.

Category 8: Photojournalism: Photograph attached to any Jewish or Israel-related story

Judges’ comments: A beautiful, expressive image that is easily identifiable as Israeli dance.

Judges’ comments: This sensitive photo shows only the students’ legs and skirt lengths, an apt response to the school rule that the story explores.

Category 9: Layout, design or infographic attached to any Jewish or Israel-related story, one page or multiple pages

Judges’ comments: Excellent layout’s use of image from outside sourcing, 2-page spread expresses the action of the moment.

Judges’ comments: Expressive use of online capabilities, including graphics and interesting mix of typefaces that are focused on enhancing the alarming nature of the subject.

Category 10: Video Reporting of any Jewish or Israel-related story

Judges’ comments: Very professional use of video for cooking instruction.

“VIDEO: Creativity in the spotlight as Choirhawks forge their own musical path,” Sabrina Jahan, The Boiling Point, Shalhevet High School